Windows 8 Modern UI apps (Metro style apps) are designed in such a way that the user should never need to close them. For this reason, you won’t find a traditional close button on any app, however, that doesn’t mean they can’t be closed. You can close any Modern UI app by using + keyboard shortcut or by simply clicking and dragging the app from the top of the screen to the bottom of the screen or by swiping in touch screens.

A new tool called Close Threshold has been released that allows Windows 8 users to change the default drag-and-drop threshold for closing apps through mouse and touch gesture, or to completely disable this behavior. 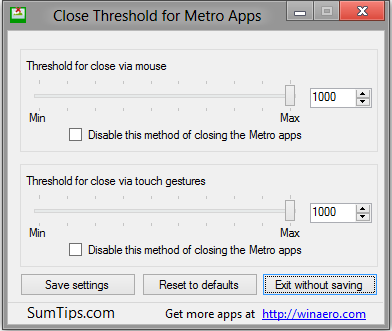 By default you have to click and drag apps to the bottom of the screen to close them. Using Close Threshold, you can set threshold to close apps by just moving them to the center. And if you want to set different drag threshold for mouse and touch gestures, you can do that as well using the separate slider provided by this tool. Finally, to revert back to original Windows 8 settings, just hit the “Reset to Default” button.

Close Threshold is a portable application and it works with both 32-bit and 64-bit versions of Windows 8.